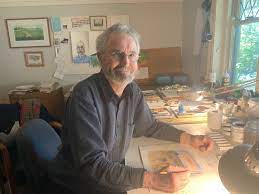 I had known Andrew’s superb body of work for many years, but it was at an illustrator’s presentation night at Zart Art when our paths first crossed. My manuscript, Bob the Railway Dog had recently been accepted by Black Dog Books, then an imprint of Walker Books Australia. Maryann Ballantyne and I had been thinking about illustrators and as I watched Andrew talk about painting landscapes, I knew he was absolutely the right person to illustrate Bob. Maryann rang Andrew the following day and although we had to wait a while for Andrew to finish his current project, it was worth the wait. The first image I saw was the opening double spread of the train pulling into Carrieton Station and it took my breath away. Still does.

‘In those hushed moments before sunset, a train crept, hissing and sighing into Carrieton Station, South Australia. It was September, 1884.’

We launched at a little train bookshop in Mont Albert, surrounded by train books, train enthusiasts, good friends and Smithy, the Smithfield I’d met in 2010 and the model for Andrew’s illustrations. Later that month we travelled to Adelaide where we launched at the place where the story first began for me, the National Railway Museum in Port Adelaide. In 2018 I once again had the privilege of working with Andrew on To the Bridge, the true story of nine year old Lennie Gwyther and his nine year old pony Ginger Mick who rode 600 miles to Sydney to see the opening of the Sydney Harbour Bridge. Although three launches were planned for this book, one at a little school overlooking the Sydney Harbour Bridge, because of Covid only one took place on 12th March last year in Leongatha. In 2020 Andrew was awarded the inaugural Albert Ullin Award created with a bequest from the late The Little Book Room co-founder, Albert Ullin, for a children’s book creator ‘in recognition of a body of work by an author or illustrator of children’s books who has a significant and ongoing contribution to children’s literature in Australia.’ I cannot think of a more worthy person to receive this award. https://www.booksandpublishing.com.au/articles/2020/10/21/158270/mclean-awarded-inaugural-10000-albert-ullin-award/

Have a look at Andrew’s website to read more about him and his wife Janet who worked with Andrew on many, many books http://mcleanpicturebooks.com/index.html and also check out the Books Illustrated Website – two links Illustrators and Inspiration – Stories about Stories https://www.booksillustrated.com.au/andrew-mclean/

I’m honoured to have original artwork from each of these precious books hanging on my study wall.