Bob the Railway Dog has been receiving some lovely reviews – here are some I’d like to share. There are also some great Classroom notes for teachers to download at http://classroom.walkerbooks.com.au/home/bob-the-railway-dog-corinne-fenton-and-andrew-mclean/

Bob the Railway Dog by Corinne Fenton and Andrew McLean

Corinne Fenton expertly captures those little-known stories of Australian life, like the one about the dog who sat patiently awaiting her master’s return – The Dog On the Tuckerbox (he didn’t, by the way; bring tissues for that one). Or, the one about the elephant who gave ride after ride to children at the zoo, back when that was common practice –Queenie: One Elephant’s Story, set in the 1940s.

Corinne is obviously a dog lover, because following last Christmas’sLittle Dog and the Christmas Wish, which is also gorgeous, she is back with another dog – Bob, the true story of a scruffy brown stray who became a bit of a legend on the South Australian railways during the late 1800s. Corinne lends her factual tales such an assured storyteller’s voice that it’s gorgeous to read aloud. Andrew McLean’s illustrations are instantly recognisable and take the reader immediately to that time and place. The power of one relatively short life to tell the story of a different time is remarkable.

The true story of a little dog who had adventure in his heart and the rattle of the rails in his soul.

In the early days of the railway, when shiny new tracks were opening vast areas of Australia, there was an adventurous dog who was part of it all. As the tracks were being laid he was there on the train – riding in his favourite spot on top of the Yankee engine. Everyone knew him. He was Bob the Railway Dog.

by  Alexa Dretzke is a Children’s & YA Book Specialist at Readings Hawthorn.

This is not Corinne Fenton’s first picture book about a dog and like the one in The Dog on the Tuckerbox, Bob is a loyal dog, but his faithfulness is more to the trains that travelled throughout southern Australia in the 1880s than to one person.

Sent by train with a cargo of other homeless dogs to be outback rabbit hunters, Bob catches the eye of the train’s guard and is adopted by him, lucky Bob! Bob loves his owner but he loves jumping from train to train a bit more and eventually becomes renowned among the railway community. He is a wanderer and although he remembers his original guard owner and visits him, he yearns to travel more widely and so stays with many train workers over the years. Folklore has him attending many historic occasions and his photograph is still displayed at the Adelaide rail museum. Bob’s adventurous ways are perfectly captured in words and pictures in this charming book for ages 3 and up.

Ill. by Andrew McLean. Black Dog Books, 2015. ISBN 9781922179890
(Age: 4-adult) Highly recommended. Dogs, Loyalty, Independence, Steam trains, Railways, Historical story, Nineteenth century. Transport. Living in Peterborough for twenty years, it was impossible not to hear the story of Bob the railway dog, and to see it now memorialised in several books, a statue in the main street of the town, with an information board in Terowie where it was known as Terowie Bob, is wonderful.
Several years ago a book was published about the animal, (The Railway Dog by Olwyn Parker) and now a picture book adds another level of interest. And of course there is a Facebook page for people to add photos of themselves with the statue in Peterborough.
This picture book takes the reader into the reasons for the railways to exist in the outback regions of South Australia, and throughout the story the impact of the railways on small communities is neatly observed, while readers will have an overview of the size of Australia and the distances travelled by the dog.
At Carrieton Station in 1884, a train carrying a load of dogs destined for the cattlemen in the north of the state, arrived and one dog piqued the interest of the guard, Ferry.
He took the dog, naming him Bob, and soon they travelled together on the trains in the Mid North. But when the intercolonial between Adelaide and Melbourne was opened, he climbed aboard. Several stories of Bob travelling even further were known, but he was certainly well known on the trains around South Australia.
This delightful story of Bob will melt the hearts of the readers and McLean’s wonderful illustrations add to the development of the tale. His watercolour, charcoal and black pen illustrations bring the last part of the nineteenth century to life, as we see the sparse landscapes of the mid north of South Australia, the growing wealth of the cities, the detail of the stations now closed, the finely observed porters’ rooms, and the steam trains chugging through the saltbush. Text and illustration create a beautiful picture book evocative of times past, but extolling the virtues of independence and loyalty.
Fran Knight 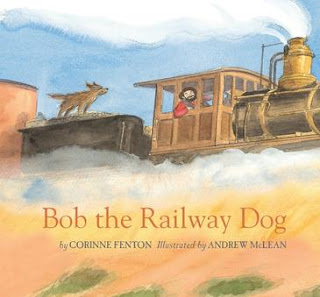 Based on fact, this gorgeous book shares the story of a dog that had an amazing life travelling the tracks in the early years of Australia’s railway network in the late 1800s.

Rescued by a station guard from a carriage load of dogs heading to outback South Australia to be rabbit hunters, at first Bob waited at the station for his master to return each day. Eventually he joined Guard Ferry on his journeys and, finally, Bob travelled the tracks alone, befriending other guards, drivers and porters and always finding a warm bed at night wherever he travelled.

Bob the Railway Dog is not merely a story of an adventurous pet, but also an account of the early years of the rail network in Australia. The story captures the sense of connection between the workers at the various stations and destinations, despite the vast distances between them, and the excitement of the changes brought about by the railway system.

Corinne Fenton’s text evokes both an interest in the history of the railway network and an emotional response to the lovable character of Bob. Andrew McLean’s watercolour, charcoal and black pencil illustrations portray the rail network, vast Australian landscape and city scenes beautifully. Bob’s cheeky personality shines through in both text and illustrations and young train enthusiasts will enjoy the many images of tracks, engines, trains and stations throughout the story.

Bob the Railway Dog shares a heartwarming story from Australia’s history with young readers, adding an element of adventure and excitement to the development of the rail network through the outback.

A framed photo of Bob is kept at Adelaide Station and at the National Railway Museum in Port Adelaide you can see the special collar give to Bob by the railway men who loved him best.

Bob the Railway Dog by Corinne Fenton, illustrated by Andrew McLean (black dog books)
HC RRP $24.95
ISBN 9781922179890
Reviewed by Anastasia Gonis
We are taken back in time and history as soon as the book is opened; to South Australia, 1884 in fact. With lyrical prose that shines and illuminates Corinne Fenton’s love of social history, we view the real life story of Bob from his arrival at Carrieton Station. He is among a collection of homeless dogs from Adelaide destined as rabbit hunters in outback South Australia. Will Ferry, a guard, sees the pup and ‘something tumbled in the man’s heart.’ He names him Bob.
But Bob is a restless spirit, a lover of trains, and a traveller. He becomes known from Oodnadatta to Kalangadoo. Housed and fed by drivers and guards, even in the porter’s room at wherever station he stops, Bob is welcomed by everyone.
It’s a magnificent adventure undertaken by Bob the Railway Dog who rides trains, and follows train tracks. His travels allow him to experience many historical events during his lifetime. And he always returns to visit his friend and saviour, Will Ferry.
This story is about Bob, but also is an historical portrayal of the birth and expansion of the railway in outback Australia. The outstanding illustrations by Andrew McLean of Bob and the railway’s history are created with watercolour and charcoal and black coloured pencil. This stunning book is suitable for the 5 -105 age group. It comes highly recommended.

Do you have an adventurous spirit?

If so, you will love Bob the Railway Dog, a delightful heart-warming story of a stray dog, cared for by a railway guard, who travels throughout South Australia and other parts of Australia by jumping aboard any train that passes his way.

With evocative and image driven phrases such as ‘something tumbled in the man’s heart’ and ‘shiny new tracks like spider webs’ and ‘spinifex bushes peeped from beside the track like woolly-headed ghosts’, Corinne Fenton presents the reader with a slice of Australia’s transportation history with a dog as the main focus. Dogs also feature in a couple of her other books, namely The Dog on the Tuckerbox and Little dog and the Christmas Wish, both of which are delightful stories for the whole family to be read over and over again.

Andrew Mclean’s inspiring water colour illustrations of South Australian landscapes of hillsides, deserts and the wheat belt area, combined with his intricate detailed drawings of the fashion and architecture of the time make each picture a story in itself. I loved the endpapers for the way the landscape is portrayed before train transportation and the image of Bob on the back cover stirs up imagery and emotions of Red Dog, who travelled the Pilbara looking for his master.

Bob the Railway Dog is based on a true story of a stray dog that became a legend with the railway men of the time. Bob will weave his way into your heart as you follow his journeys across the country while befriending train drivers, guards and passengers alike.

Children and adults of all ages will love this feel-good story, a little slice of unknown Australian history.

by Corinne Fenton (Goodreads Author), Andrew McLean (Illustrator)
4.0 of 5 stars 4.00  ·
The true story of a little dog who had adventure in his heart and the rattle of the rails in
his soul.
In the early days of the railway, when shiny new tracks were opening vast areas of Australia, there was an adventurous dog who was part of it all. As the tracks were being laid he was there on the train – riding in his favourite spot on top of the Yankee engine. Everyone knew him. He was Bob the Railway Dog.
READINGS E NEWSLETTER AUGUST 2015
Corinne Fenton has a gift for seeking out true but rarely told Australian stories from long ago and giving them new life, and Andrew McLean’s watercolours are a beautiful fit for the story of Bob the Railway Dog. Perhaps I should say it’s more of a portrait than a story, but no less appealing for that. Bob travels on a wheat train in South Australia during the early days of the railway, and each page gives you a vivid sense of place and time.
Tags: Dogs, history, National Railway Museum, Railways, Smithfields, South Australia, steam trains, Trains, Walker Books